A History of Community Planning in Gowanus

For the past decade, hundreds of people — tenants, homeownership, public housing residents, small business owners, artists, environmentalists, affordable housing advocates, and more — have been engaged in community planning for the future of the Gowanus neighborhood.

From the advocacy for Superfund designation, to the “Bridging Gowanus” community planning process from 2013 to 2015, to the Department of City Planning-led Gowanus Neighborhood Study process beginning in 2016, to the public engagement happening now ahead of the formal ULURP review process, community members have been actively engaged in shaping the future of the neighborhood.

Cleaning up the Gowanus Canal has long been a top priority for the Gowanus community and surrounding neighborhoods. Community members (and especially Congressmember Nydia Velazquez) campaigned hard to win the designation of a Superfund site to bring long needed resources and attention to reverse decades of pollution and neglect.

Following the EPA’s designation and the initiation of the Superfund process in 2009, the Gowanus area began to see mounting development pressures. Under the existing zoning, a slew of hotels, entertainment/recreation venues (axe-throwing, rock climbing, shuffleboard, youth tennis, youth swimming, and many gyms and bars), self-storage, and other as-of-right developments have populated the neighborhood.

Recognizing that without a plan to preserve and strengthen the neighborhood (and to include the infrastructure, planning, and amenities necessary for a sustainable future), scattershot development and spot rezonings would continue, elected officials, residents, and community stakeholders came together to begin a community planning process in 2013 called Bridging Gowanus.

The Bridging Gowanus community planning process was convened by the local elected officials representing the Gowanus area, organized together with community leaders from resident, civic, environmental, business, arts and housing groups, and Community Board 6, and facilitated by the Pratt Center for Community Development. The goal was to develop the outlines of a comprehensive, community-based infrastructure and land use plan for a safe, vibrant, and sustainable Gowanus area. Between 2013 and 2015, we held dozens of public meetings, large forums and small working groups, in public housing developments, churches, parks, and business, with hundreds of participants including long-time and newer homeowners, tenants, NYCHA residents, small business owners, environmental activists, artists, affordable housing advocates, and more.

In the summer of 2016, we asked for feedback to prioritize these recommendations, and more than 500 stakeholders weighed in online and at in-person open house events. The overarching goals that emerged from this process were:

Beginning in the fall of 2016, the NYC Department of City Planning began to engage community members, gathered under the auspices of Community Board 6, to develop a planning and land-use framework for the Gowanus neighborhood, building on the goals articulated by the Bridging Gowanus process. As the New York Times reported at the time, we hoped that by getting out ahead of the City’s rezoning plans, we could give communities a stronger voice in the rezoning process which historically has been driven by developer profits rather than community and citywide needs.

DCP convened five issue-based working groups (Arts and Culture, Housing, Industry and Economic Development, Public Realm, and Resiliency and Sustainability), open to any community members who wanted to join. Each of these groups met five times in 2017. City Planning also held several open house meetings during this time, attended by hundreds of people. In June of 2018, City Planning released the extensive framework document: Gowanus: A Framework for a Sustainable, Inclusive, Mixed-use Neighborhood based on input from these sessions.

In most areas, the proposals of City Planning’s Gowanus Framework matched the goals and priorities of “Bridging Gowanus.” One notable area of disagreement was investments in the NYCHA developments. Community members have consistently had significant investments to address dilapidated conditions in NYCHA’s Gowanus Houses and Wyckoff Gardens as one of the top priorities for any rezoning. At the time of the framework, City Planning had not yet agreed to that priority.

Following the release of the Gowanus Framework in June 2018, the Department of City Planning held a well-attended open house (summarized in this document) and collected input through an online portal called Plan Gowanus.

The Draft Zoning Proposal was released in February 2019, followed by the Draft Scope of Work for the Environmental Impact Study in March of 2019. Community stakeholders were invited to submit detailed feedback on these documents. You can find comments from Councilmembers Lander and Levin here, and comments from Community Board 6 here. Over the course of the 2019, DCP gave presentations to stakeholders and community members, and participated in issue-based discussions on various elements of the rezoning, including several roundtable discussions with stakeholders in the IBZ. Materials from these meetings are available on DCP’s website here.

During that time, the Gowanus Neighborhood Coalition for Justice, an alliance between housing, environmental, arts and industry advocates, public housing residents and neighborhood activists worked together to hone their agenda for the rezoning including three shared deal-breakers (NYCHA investments, net-zero CSO, and an environmental justice special district with meaningful community oversight) and 17 priorities, which they released in February 2020. CM Lander and CM Levin have participated in monthly meetings to facilitate communication between DCP and the Coalition.

The City shut down all items in ULURP (Unified Land Use Review Procedure) from March to September, 2020, due to the Covid-19 crisis, and widespread halted the rezoning process. When the City resumed ULURP and indicated its intention to move forward with the Gowanus application and public review, Community Board 6 requested additional public engagement, to consider several remaining open questions and further reflect on the application within the context of Covid-19.

City Planning agreed to participate with CB6. As a result, three public meetings were held on zoom, to provide a platform for DCP to reintroduce the plan and share updates. These presentations included:

Due to necessary public health precautions related to the Covid pandemic, these meetings were held virtually using zoom. Fifth Avenue Committee opened their community room for NYCHA residents to participate in person in a safe, socially-distanced setting. Community Board 6 launched a comment form to collect rolling feedback from community members, which is shared with DCP. CB6 has continued to have robust discussion and give feedback to the City about the rezoning.

In December, City Planning announced its intention to certify the Gowanus Neighborhood Rezoning application for review on January 19, 2021. On January 15, opponents of the rezoning brought a lawsuit seeking to stop the rezoning, and a judge issued a Temporary Restraining Order, putting the application on pause while she considered arguments.

Those arguments are underway, and are anticipated to be resolved in the near future. It is critical to do all we can — as we have done from the beginning of this process, and as we should do in all land use planning — to reach out and include as many community members as possible. Online hearings introduce new challenges to participation that deserve attention, particularly for those who lack reliable internet access or familiarity with technology. They also increase access for other community members, like parents who might not have been able to attend in person due to childcare responsibilities. We can and should do more to make sure everyone can get the information, access the hearings, and make their voices heard, with a particular focus on communities who would otherwise be least like to participate.

Next Step: Certification and ULURP

The ULURP process typically takes 6-8 months to complete. There is a set timeline for review, public hearings, and advisory votes by the Community Board and Borough President before the proposal goes to the City Council and then Mayor for approval. Updates on steps in the process will be available on the Department of City Planning website. 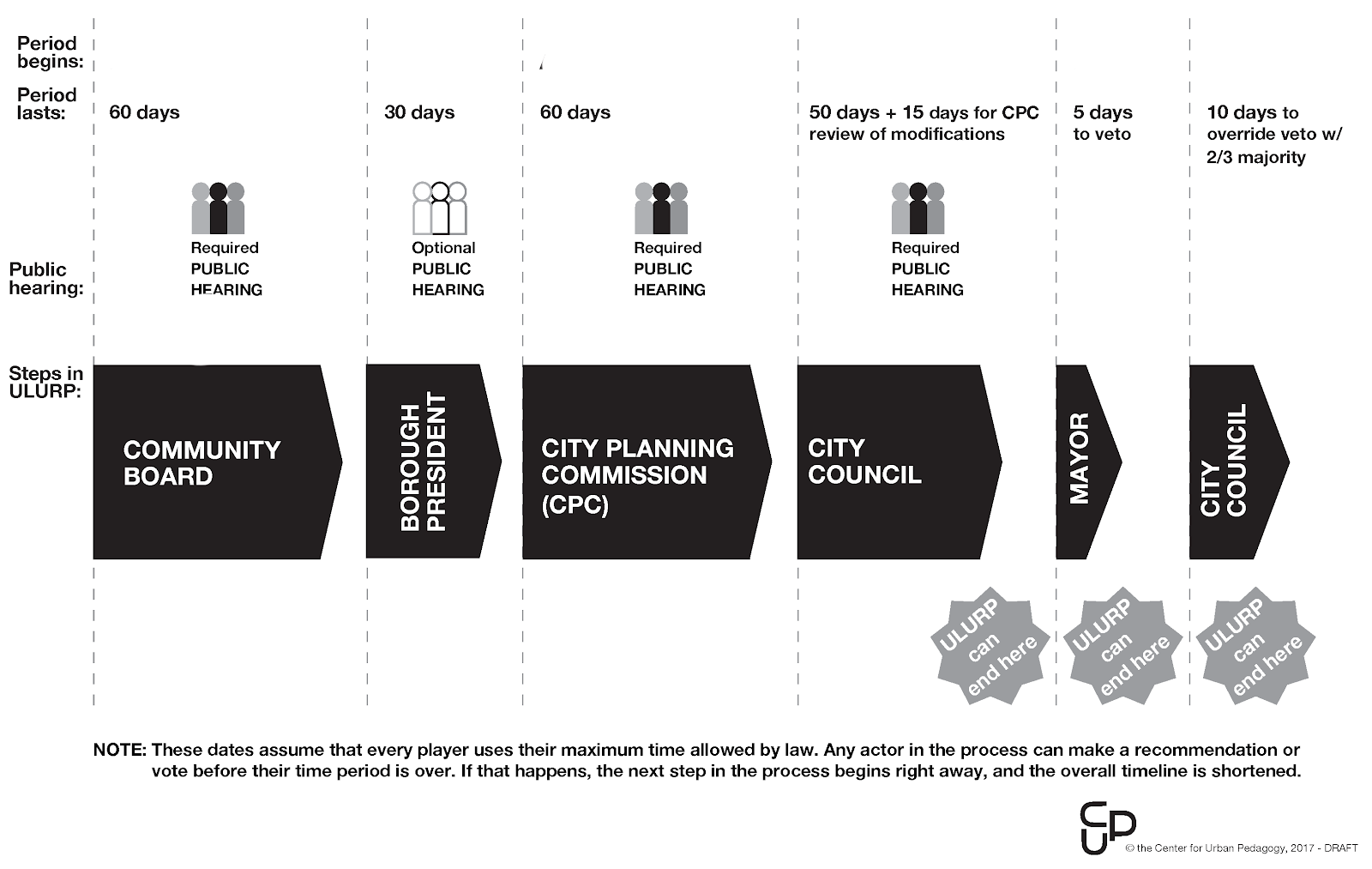 The office is ADA-accessible. There is an elevator at the end of the entrance hallway behind the stairs.

Send a message to Brad Lander