New York City Council legislation requiring landlords to register their rent-regulated apartments with the city or face fines is a “waste of taxpayers’ resources.”

That was the blunt message delivered by Anne-Marie Hendrickson, a deputy commissioner at the city’s Department of Housing Preservation and Development (HPD), at an often combative, six hour-long public hearing on Monday about potential reforms to city housing laws.

But council members showed no signs of backing down, instead calling for increased oversight of property tax breaks that award landlords hundreds of millions in subsidies. In exchange, they are required to limit rent increases on tenants under a system known as rent-stabilization.

As ProPublica reported in January, up to 200,000 apartments may be missing from the state’s registry of rent-stabilized apartments, including about 50,000 that are subject to rent limits because of a subsidy that can reduce property taxes by upwards of 90 percent. More than $100 million a year has gone to landlords who didn’t register for rent stabilization while collecting the tax breaks.

Those figures — and related concerns — were prominently aired at Monday’s hearing, spotlighting what tenant advocates have long said is a record of weak enforcement by city and state housing agencies.

Hendrickson did not dispute ProPublica’s estimates of missing apartments. “If it’s 200,000 units, per the article, then its 200,000 units,” Hendrickson said. She conceded that many landlords who collect a tax break, known as 421-a, don’t bother to register apartments for rent stabilization as required by law.

But Hendrickson pushed back against “micromanagement” of her agency, saying HPD is already working to boost landlord compliance. She pointed to her agency’s participation in a task force that state Attorney General Eric Schneiderman convened to police the 421-a program. In December, Schneiderman said the effort had returned about 1,800 apartments to rent stabilization.

Hendrickson’s rebuttal failed to impress council members. “I think that’s a drop in the bucket just based on what ProPublica put forward,” Williams said.

To identify all the apartments that may be missing from rent stabilization, Council Member Ben Kallos has proposed a parallel city registration system that would require landlords to account for their apartments with both HPD and the state’s Department of Housing and Community Renewal (DHCR), or face fines for not doing so.

Currently, landlords are only required to register with DHCR, which doesn’t proactively monitor its data or check it for accuracy.

That was made clear by Nancy Sher, a tenant profiled in a December ProPublica article. Sher’s rent was incorrectly reported to the DCHR for several years, allowing her landlord, Two Trees Management, to overcharge her and dozens of other tenants in her building.

At Monday’s hearing, Sher read council members the standard disclaimer that accompanies DHCR rent histories, which tenants can request for their apartment: “DHCR does not attest to the truthfulness of the owner’s statements or the legality of the rents reported in this document.”

“Unless you require HPD to verify the rent amounts,” Sher said, “it remains an invitation for landlord fraud.”

HPD’s Hendrickson said the city shouldn’t have to duplicate what the state is already doing.

“The state already requires registration, and while there are certainly problems in the state’s administration of that system, those problems are better addressed by working with the state to improve its system rather than by requiring the city to duplicate that system,” she said.

State officials have acknowledged there’s a problem but have been unable to explain it.

At a budget hearing in Albany earlier this month, DHCR Commissioner James Rubin told lawmakers he did not know why his agency’s count of New York City’s rent-stabilized apartments differs from a triennial estimate prepared by HPD.

Stephen Werner, a staff analyst at HPD, testified that landlords have historically only registered about 800,000 units for rent stabilization with the state. But HPD’s estimate counts both apartments that are and should be registered, he said, totaling about 1 million in all.

Kallos asked when Werner first began to notice the discrepancy. 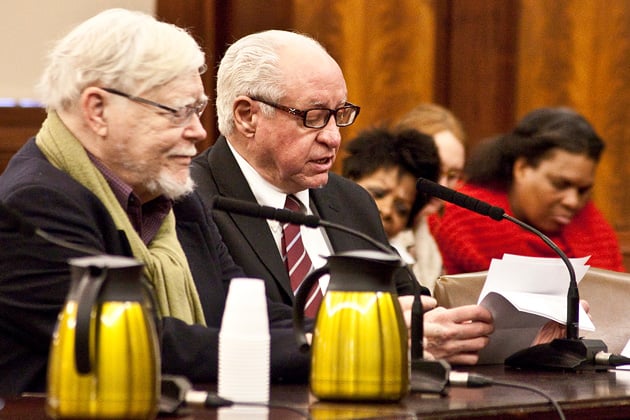 Stephen Werner, right, a staff analyst at HPD, noticed discrepancies in the count of rent-stabilized apartments registrations beginning in 1993. (Bryan Anselm for ProPublica)

“In 1993,” Werner answered. He said he alerted his superiors and wrote memos about the issue.

Kallos asked Hendrickson whether she had reviewed any materials Werner prepared “over the past two decades before the ProPublica story came out.”

“Do you know if anyone has?” Kallos pressed.

“I do not know,” Hendrickson answered, but she offered to review them. (ProPublica has filed a public records request for Werner’s documents, but the agency has so far not provided them).

See for yourself in ProPublica.